How to pay with Bitcoin?

More and more companies want to allow Bitcoin as a means of payment. But how can consumers pay with it? And is the cryptocurrency suitable for this at all?

Many people know the Bitcoin primarily as a speculation object. For weeks, the oldest and most important cryptocurrency has been chasing records and is currently scratching the $50,000 mark. Originally, however, it was intended as a digital means of payment – as a decentralized currency without third-party control.

For the vast majority of consumers in Germany, paying with Bitcoins is not yet a common payment method. That could change. Recently, heavyweights such as electric car manufacturer Tesla announced that they would accept the digital currency for payments in the future. The popular payment provider PayPal had already announced in October that it would offer customers in the USA the option of doing so. The leading credit card providers Mastercard and Visa also plan to integrate cryptocurrencies into their networks before the end of the year.

Some companies have already been allowing payment for some time. In the Microsoft Store or on the streaming platform Twitch, gaming fans can already pay with bitcoin. The online encyclopedia Wikipedia or the environmental protection organization Greenpeace approve donations with the currency. Customers can also pay for their meals in this way at the food delivery company Lieferando. Even in some German bars, cafés or stores – especially in Berlin – bills are sometimes settled with Bitcoins.

What do consumers need for payment?

First, of course, consumers need Bitcoins, which can be purchased on crypto exchanges and other marketplaces. Many buyers are also traders who use automated crypto trading software. Fractions of the coins can also be purchased: for example, 0.00025 Bitcoins at the current price of about ten euros. For storage, a digital wallet is required, a so-called wallet. This contains a set of personal codes made up of randomly generated numbers and letters – comparable to account numbers.

“Hot wallets” are based on software, are connected to the Internet and exist as a desktop version, an app on a smartphone or as an account with an exchange. Cold wallets, on the other hand, are physical storage media such as special USB sticks or simply a sheet of paper. They are considered particularly secure because they are only ever connected to the user’s own computer for a short time or not at all. The advantages of “hot wallets” are their quick use and availability.

Most wallets are secured by a private key of the user. There are many providers of digital wallets. Well-known companies are Ledger, Trezor, Exodus or eToro.

How does the payment work? 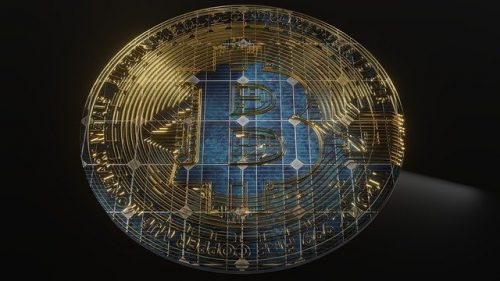 The Bitcoins themselves are located on the blockchain. This technology is “open source,” meaning it can be viewed publicly. Like in a digital logbook, data can be transmitted securely, up-to-date and transparently. This “blockchain” consists of an infinite number of (data) blocks in which all transactions are stored. For the payment of bitcoins, the buyer needs the address of the recipient. If a payment is made, the private key is used as a digital signature, so to speak, to confirm it. Afterwards, the signature goes back into the wallet.

Each transaction is encrypted and verified by the network computers involved. These “miners” verify that there are enough Bitcoins in the wallet and that the payment is correct. They store the transfer in a block of the chain if they find the correct solution to a special calculation problem. Then the process is complete. With bitcoin, this can take anywhere from ten minutes to several days if many transactions are going on at the same time. In addition, the network fee determines the speed. If the user pays more, the transfer goes faster.

Most merchants and stores use service providers like BitPay to process the payment. These companies act as trustees and, after the payment of the Bitcoins at a fixed exchange rate, take over the exchange into the traditional currency. They then pass the money on to the seller via bank transfer. For this, BitPay gets a transaction fee.

What are the advantages?

Basically, with Bitcoin, there is no institution that can make monetary decisions or regulate the exchange rate. According to experts, this also contributes to the positive price development. Due to the extremely loose monetary policy of many central banks and the immense flood of money in the form of government aid, some investors apparently fear high inflation in the medium to long term.

They therefore use bitcoin as a hedge against high currency devaluation. The digital coins have a kind of built-in inflation protection. For providing their computing capacity and mutual checks, the “miners” whose hardware has previously found the latest block receive bitcoins. Every four years, however, the reward halves and the process slows down. To ensure that the currency does not ultimately become inflationary, only 21 million Bitcoins are available in total.

Other advantages of paying with Bitcoins include a certain degree of transparency due to storage on the blockchain and low transaction costs, especially for international transfers.

Is the whole thing secure?

Does paying with Bitcoins make sense at all?

Consumers primarily need value stability in payments, which Bitcoin cannot provide,” Bareis says. “Let’s say: I want to pay for a Tesla with Bitcoins and I own the equivalent of 60,000 euros. Within three days, however, the value can halve and what do I do then? Do I then buy a Tesla without a drive?

In fact, significant price fluctuations often occur with Bitcoin. In the past three months alone, the value of the currency has increased by more than 200 percent, according to coindesk.com. At times, however, the price also plummeted again. In January, for example, there were temporary losses of up to 20 percent within a few hours.

When the value briefly decreases, more Bitcoins are needed for payments accordingly. “As long as these fluctuations are so massive, it is difficult to imagine that bitcoin will establish itself as a common means of payment in the next few years,” says Bareis. Many consumers would avoid risks and focus on security. “It would therefore be paradoxical for them to resort to Bitcoins for payment,” says the consumer protectionist.

Will the payment method become established?

Experts from the scene are also rather skeptical. “Still quite few people own Bitcoins,” Philipp Sandner, head of the Blockchain Center at the Frankfurt School of Finance & Management. Even if a broader mass could be reached through PayPal, Bitcoin is not a suitable means of payment due to the high fluctuations, he said. In addition, “Even Bitcoin fans do not want to give away their coins, but rather rely on the increase in value,” says the expert. In addition, the taxation of the cryptocurrency is a complex issue, which makes payment complicated.